Posted by Gary on 4/10/2015 to Press News
Rocky Reconvict interviewed Cliff Mafias, the president of Red Rum Motorcycle Club, and the other members of the biker club in the April/May issue of Inked Magazine. They met at Southside Cycles in Brooklyn, NY. The photographer Sophia Holland said the "aim of the 'brotherhood' project is to show who these people really are." The image of bike gangs roving across an American landscape wreaking havoc all along the way has deep roots within our perception of motorcycle clubs. Bikers have become associated with criminal activity. The article begins by exploring that perception, Rocky Rakovic brings our attention to an incident where it began to take root. Life magazine documented a fight that broke out in Hollister, CA between a couple of clubs back in 1947. The American Motorcycle Club responded with a statement that 99% of bikers were citizens who obeyed the law. The remaining 1% were outlaws. This was the birth of the "1%" proudly worn by clubs that operate outside the law. It can be seen on their patches, and the image it represents is written deep across an impression many of us have of all bikers.

"Sons of Anarchy" & The Reality Behind Biker Clubs

The interview dives into how the members of the Redrum Motorcycle club see themselves in relationship to that reputation. More recent representations of bikers, like "Sons of Anarchy" play off that image in ways that bend the reality of life inside one of these clubs. Blanchard told Rakovic that they accurately portrayed the hierarchies, protocols and how clubs operate. His frustration was with how the show "blows everything out of proportion". He mentioned that he thought it was an exaggerated drama that was "killing 60 guys a week". They can only be amused by these kinds of depictions when they think about what their club means. They see themselves as ambassadors representing a different meaning.

The reality behind the Redrum Motorcycle Club is one of service. Few people recognize how much these clubs give back to the community. These guys ride for St. Jude every year. They participate in a Purple Heart Association run. They organize book drives for disadvantaged kids, and they have run the last 12 years from the Bull on Wall Street to Bear Mountain in support of Native American Scholarship. The Redrum Motorcycle Club was founded back in 2006 as Redrum Crew, as a Native American biker club. They see their relationship to each other patterned off of the Iroquois Confederacy, five nations that came together. It is a democratic principle of brotherhood that runs through their blood.

The three skulls on the Redrum patch symbolize that brotherhood. The black bandanas are in solidarity with the people of Mexico in their struggle against their government. War paint symbolizing every race of mankind is situated within an insignia that bears a peace sign. Figueroa said they were originally with a club named Legion of Doom. They broke off and began to find the type of people they were looking for to create a group that represented the positivity that spoke to them. The members they have now are dedicated. They have the type of confidence that has nothing to prove to anyone else. There is an honesty that pervades this group that is refreshing, in the article some of the members talk about being lost until they found each other. The most striking feature of their conversations is the way that they add to each other. Rakovic describes a difference he notices between an oppositional stance represented by an "or", and the "and" so often employed between one brother's thought in relationship to another person's ideas in the club. They struggle with each other, as we all do, but there is a commitment to meet each other with support that is at the core of a brotherhood where you know someone has your back. The Iroquois said that "the strength of one arrow is limited but five could not be broken." It is fitting that they see their brotherhood modeled after the confederacy of Iroquois Nations that originally fought and ultimately came together in the service of unity and peace.

The interview by Rocky Rakovic is great and the photos of different members of the Redrum Motorcycle club, shot by Sophia Holland, really capture an authenticity that is confident. Lazaro SoHo is proud to see these guys wear our men's designer jewelry. You can see different photos below where they are wearing biker jewelry that you can find on our site. The photo of one of the bikers wearing an onyx men's bracelet and a silver Cuban link bracelet for men shows him with a sly smile revealing some of the humor and spirit they share. The skull ring he is wearing looks great on him. The Redrum Motorcycle club represents the best in us, and we are honored that they chose some of our jewelry to express that spirit. 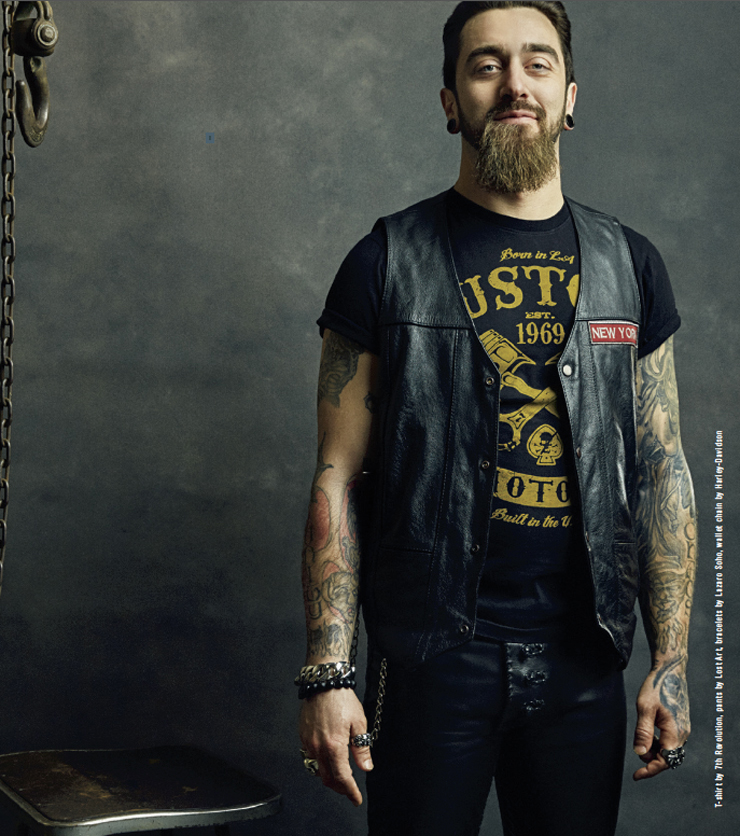 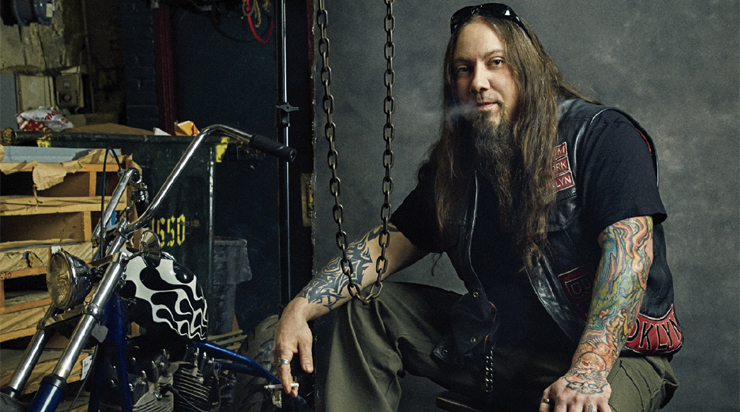 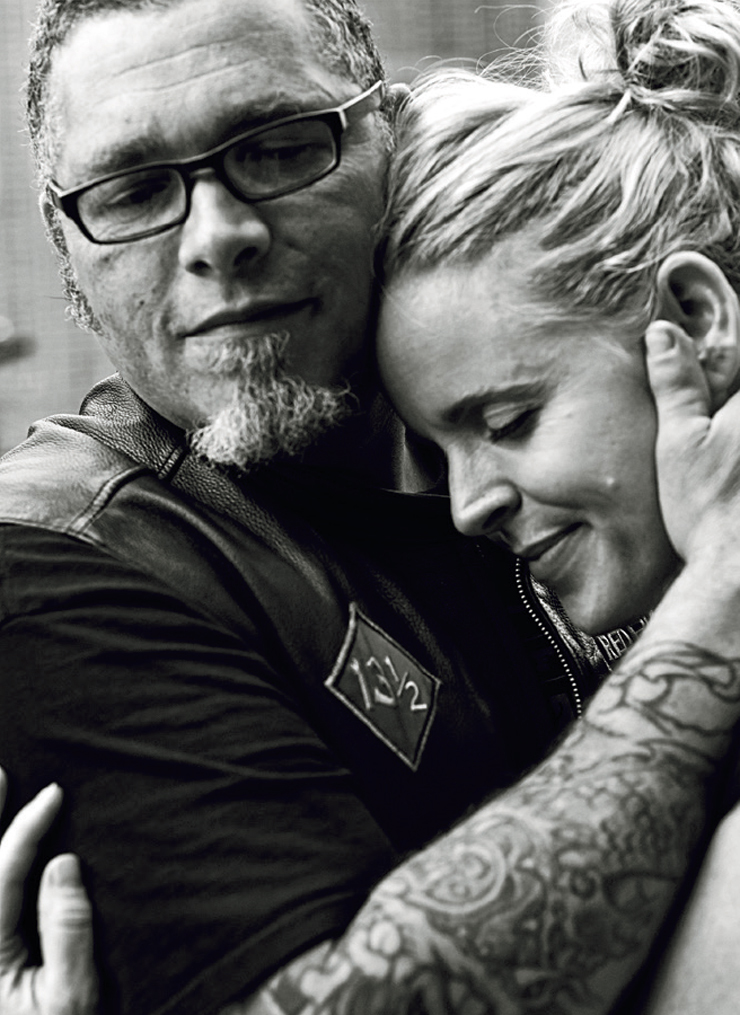 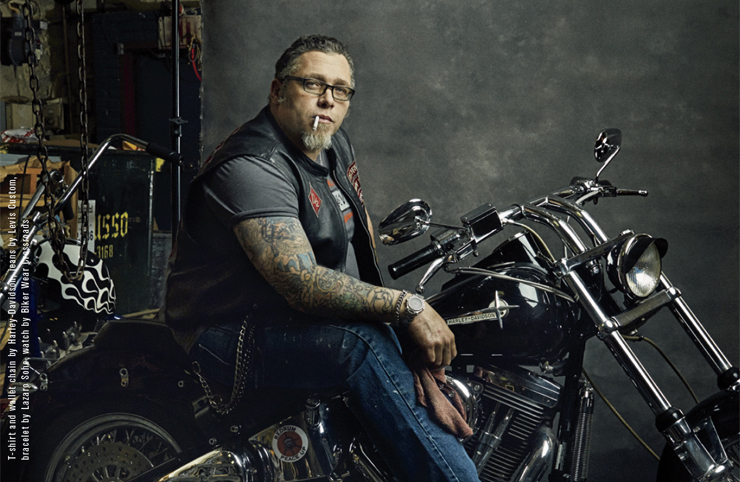 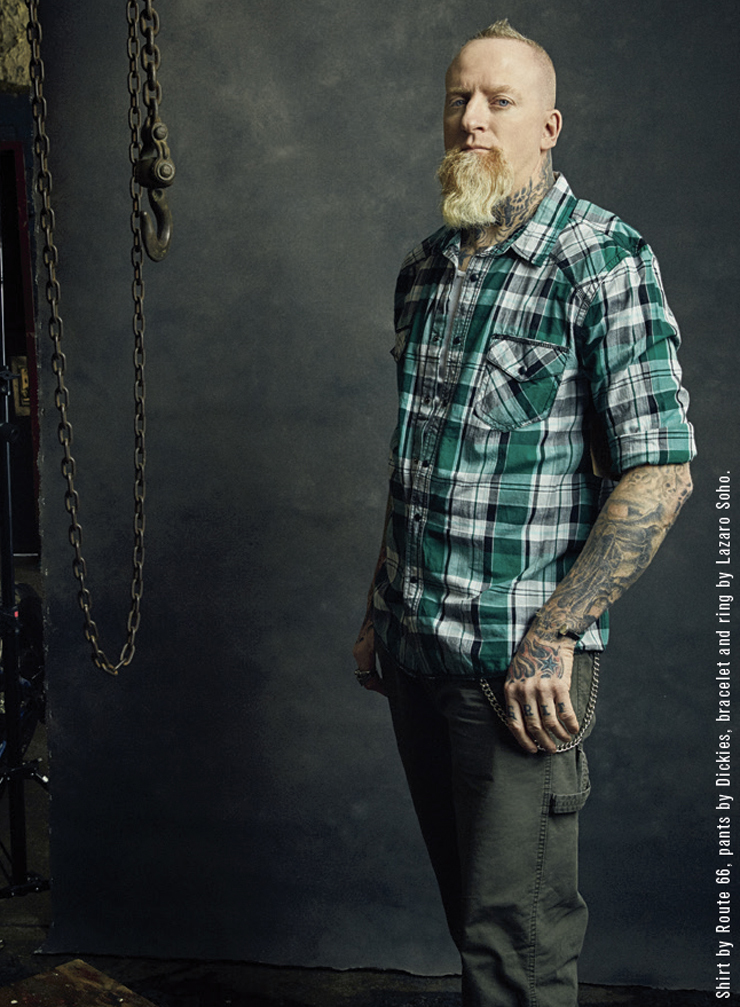