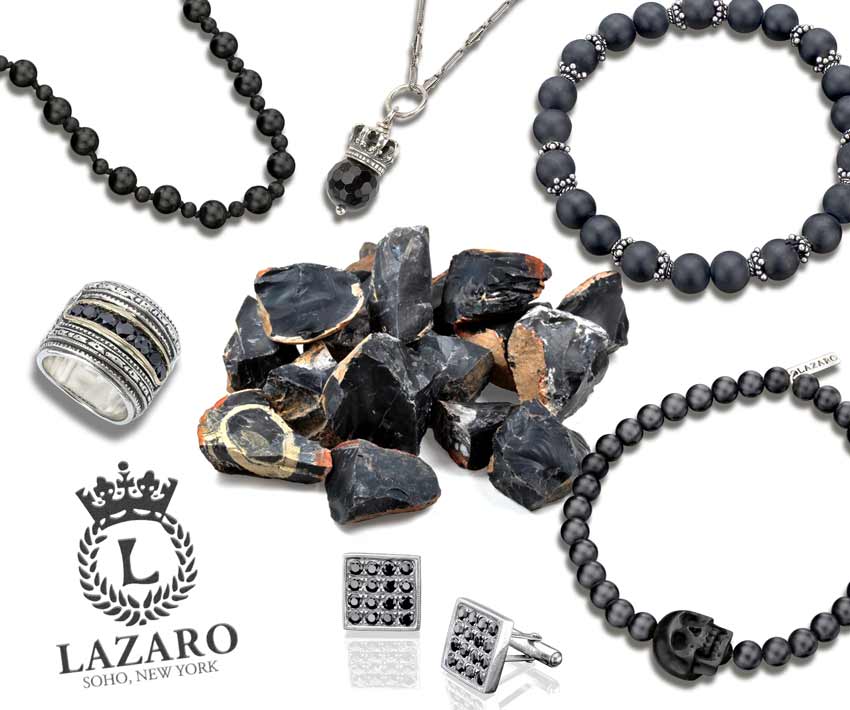 Onyx is an extremely versatile gemstone. At Lazaro Soho, we use it in many of our pieces of men’s jewelry. It is black, so it can be combined with virtually any other gemstone, metal, or other material such as leather, shell, or antler. We particularly like its dramatic contrast with silver, and have many examples of silver and onyx jewelry. It works as both an accent piece and a beaded necklace or bracelet on which to display a pendant or other special effect. Being black, it also works with every outfit and can make an impressive statement about the wearer. Onyx is one of the more popular gemstones used in men’s jewelry. Some examples of our different uses of onyx include LazaroSoho’s 18 kt gold and silver nail pendant on onyx necklace, black onyx bead and silver crown skull bracelet, and onyx eyes on men’s silver screaming skull ring.

Onyx is formed from quartz, which is an extremely common mineral. It can be found all over the world, in such places as Argentina, Australia, Brazil, India, Madagascar, Morocco, China, Ecuador, Mexico, Pakistan, Sri Lanka, and the USA (especially Arizona and California). It is similar to agate, also formed from quartz, but onyx has parallel bands whereas the bands in agate are usually wavy or concentric. Sometimes, onyx is described as a solid black chalcedony, or a banded black and white chalcedony. The name “chalcedony” comes from Calcedon, an ancient trading port on the Sea of Marmara in Asia Minor where these materials were once mined. Typically, onyx is black, or black with white bands. When onyx is brown or reddish brown, it is called sardonyx. Cornelian onyx has a red base and white upper layer and niccolo onyx has a very thin upper layer, which allows the black base color to show through as grey or blue. It is opaque and typically free from inclusions.

The crystal structure of onyx is called cryptocrystalline, which means they are very small. Because the crystals are so fine, they cannot be seen by the naked eye.It rates a 6.5-7 on Moh’s scale of hardness. Because it has such a fine texture and is also quite durable and hard, onyx is ideal for carving, and has been used for lapidaries for thousands of years and there are many examples of cameos on onyx, usually in the white layer, leaving the black base visible.

Today, we typically use onyx that has been cut into cabochons and beads. LazaroSoho has all the typical men’s jewelry pieces in onyx, such as bracelets, necklaces, and rings, but also cuff links and wallet chains.

Onyx was very popular with the ancient Greeks and Romans. The name comes from the Greek word 'onyx', which means nail or claw. The story is that Cupid cut Aphrodite’s fingernails with one of hisarrowheads while she was asleep on the banks of the Indus River. The gods turned the clippings, which were scattered all around in the sand and in the river, into stone. LazaroSoho references this story in several of our pieces of men’s jewelry that include both onyx and claws or talons, such as the authentic bear claw with lizard skin & tigers eye on a onyx bead necklace, the black onyx necklace with black diamond talon pendant, and the bronze eagle claw on black onyx bead necklace.The Romans valued sardonyx, using it especially in their seals, because it was said never to stick to the wax and could be carved in negative relief to give the raised seal. During the Victorian period, onyx was an extremely popular mourning jewelry.

The largest surviving ancient cameo is the Great Cameo of France, from approximately 23 CE. It measures 31 by 26.5 centimeters and is carved from five-layer sardonyx, featuring twenty-four figures on three levels. The Emperor Augustus is surrounded by Germanicusand Drusus Julius Caesar. Tiberius is sitting on his throne in the center, presiding over the appointment of Nero as Prince of Youth. This five-layered sardonyx cameo was made at around that date. It is currently displayed in the Bibliotheque Nationale de France in Paris.

The Gemma Augustea, on display in the Kunsthistorisches Museum in Vienna, Austria, is believed to date to the first century CE. It is a sardonyx cameo featuring twelve figures and depicts the apotheosis of Augustus and measures approximately 19 by 23 centimeters. The Fabergé Trans-Siberian Railway Egg is made of onyx, silver, gold and quartz. It was created in 1900 for Tsar Nicholas II of Russia and is currently on display in the Kremlin Armory Museum in Moscow, Russia.

Onyx is a birthstone for August, as well as the zodiacal sign Leo. It is the anniversary gemstone for the seventh wedding anniversary. Black stones have protective energies in the sense that black is the absence of light. Black onyx is a stone of protection and healing that fortifies self-confidence and responsibility. It should be worn when facing adversaries in conflicts of all kinds. Indians and Persians believed that wearing onyx protected them from the evil eye.Wearing onyx sharpens your senses and encourages a healthy egotism. It can bring inner strength, self-confidence and mental discipline to its wearer.Onyx is also known to separate. It can help release negative emotions and be used to end unhappy or bothersome relationships.