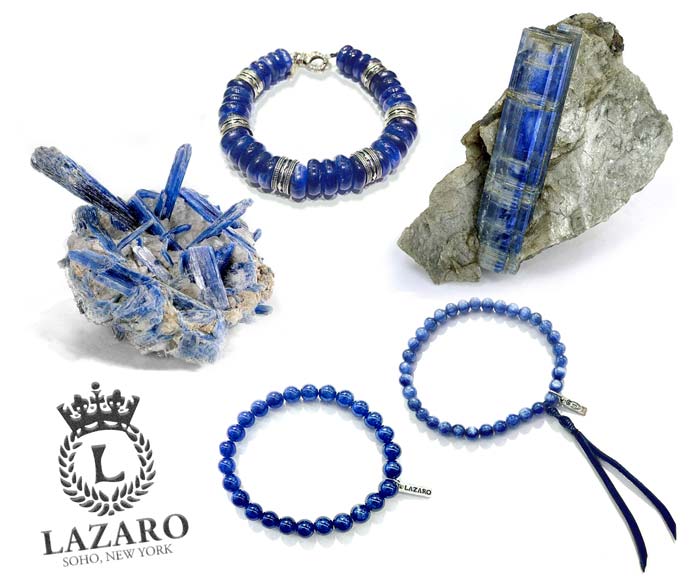 At Lazaro Soho, we use many different kinds of stones in our men’s jewelry. Some are common gemstones that most people have heard of such as sapphires and rubies, but some are more exotic, like kyanite, which can also be spelled kynite. The name comes from the Greek word kyanos, which means blue. This beautiful and unusual stone is not a traditional gemstone used in jewelry, but its bold, bright color and pearly sheen definitely express a bold, bright personality. We use kyanite in some of our most popular pieces, such as the sold out Kynite Bead Men’s Silver Bracelet.

Kyanite is an alumino silicate that can be found all around the world, most commonly in schist and gneiss. It is available as close to us as Connecticut and eastern Pennsylvania, but also in places as diverse as Austria, Myanmar, India, Kenya, Nepal, Tanzania, and Russia. It is typically a deep blue in color, but differs quite a lot from sapphire in its look, energy, and properties, and is admired in the fashion industry in its own right for its uniqueness and beauty.

Kyanite is an unusual stone in that it is what is referred to as “anisotropic,” like quartz or feldspar. This means that it is directionally dependent, or in other words, its hardness varies depending on the side from which it is measured. Kyanite is softer than sapphire, but its place on Mohs scale of hardness varies from 4.5-5 when measured parallel to the crystals and from 6-7 when it is measured perpendicularly.

In addition to being anisotropic, kyanite has perfect cleavage, which puts it in the excellent company of well-known jewelry gemstones such as diamond, topaz, and moonstone.

Because of the varying hardness,it is easier to cut kyanite into pear or oval shapes than into round beads as we have done in pieces like the hand strung 6mm kynite bead men’s bracelet, which is quite distinctive and unusual for this particular stone. Sapphires are rarer and more expensive than kyanite, but kyanite is distinctive and shows individuality.

Kyanite stones tend to be most common in sizes under two carats, and each one is unique. We find that the variation, particularly in pieces of men’s jewelry that utilize multiple kyanite gemstones, enhances the individuality and beauty of the beads. Kyanite can be translucent or transparent. Transparent kyanite can be faceted, but translucent, which is what we favor because of its natural pearly lustre, is usually a cabochon, which means it is convex in shape and polished instead. The polish can really bring out the different shades within an individual stone. Beads may have light and dark color zones, white streaks or even exhibit a cat’s eye effect.

As a healing stone, kyanite has many desirable properties. It opens communication and bridges gaps, bringing calm to the wearer. It is great for negotiations, disputes, and arbitration, and it dispels anger and promotes logic. It never accumulates or retains negative energy and can also help a wearer deal with trauma and grief.